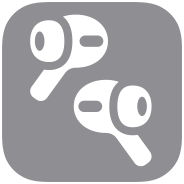 Customize your headphones to your hearing needs.

Whether you’re listening to music, watching a movie, or talking to a loved one, Headphone Accommodations help you customize your audio experience to make the world sound crisp and clear. Amplify soft sounds and adjust certain sound frequencies based on your individual hearing needs. If you already have your own audiogram, you can add it to your settings. If not, you’ll walk through a series of listening tests that allow you to set up as many as nine unique profiles based on your personal sound preferences.2

According to the Hearing Loss Association of America (HLAA), 2 to 3 out of every 1,000 children in the United States are born with a detectable level of hearing loss in one or both ears. Furthermore, an estimated 1 in 5 American teens experiences some degree of hearing loss. Loud music with EAR BUDS is a major cause.

, Bose has finally launched its new self-fitting hearing aids—Bose SoundControl™. The new hearing aids look a lot like traditional medical-grade hearing aids, but promise a radically different do-it-yourself experience that allows you to “tune it yourself”, “skip the appointments” and “pay (much) less”. The new hearing aids come with 90-day risk-free trial, dedicated product support, and will be available to purchase on May 18 in select states for $849.95 for 2 aids

What’s in the box

In the research cited by Bose, most users found themselves in the ballpark of a good hearing aid fitting. This was established by running ear canal measurements to see how close research participants self-selected amplification output was to the output of a perfectly-fit hearing aid.

Musicians crisis due to hearing loss

The Bafta-winning film Sound of Metal dramatises every musician’s worst nightmare. Ruben Stone, played by Riz Ahmed – who is up for a best actor Oscar this weekend – is a metal drummer who loses his hearing, and the film depicts Ruben’s loss exactly as he hears it, where the world around him and the intense music he plays suddenly fade to a muted and distorted drone.

These scary and involving scenes have highlighted a crisis in hearing damage right across the music industry, be it through deafness or tinnitus (a constant ringing in the ears). In a report published last month by the British Tinnitus Association (BTA), over half of the 74 tinnitus-suffering musicians surveyed said they developed the condition due to noise exposure, but nearly a quarter said they never wore hearing protection.

In 2002, before Myles Kennedy went on to front the hugely successful US hard rock band Alter Bridge – their last two albums have gone Top 5 in the UK – he was diagnosed with tinnitus. Kennedy had been playing in bands since the mid-80s and working with high levels of sound in his home studio. After his diagnosis, he left the music business for 18 months.

“I thought my days were numbered as a musician,” Myles says. “I stopped playing live and went back to teaching guitar.” When Guns N’ Roses guitarist Slash asked Myles to audition for the supergroup that would become Velvet Revolver, he declined. “I was concerned about my hearing,” Myles says. “The fear that it could get worse was the thing for me: how bad is this gonna get?”

“For a musician, losing your hearing is like losing a hand,” says Steve Lukather of Toto, who developed tinnitus in 1986 and also suffers from hearing loss. Hearing aids mean that Steve can continue his career, but watching Sound of Metal hit close to home. “The movie disturbed me,” he says. “I know what it’s like to be all muffled up like that. It’s terrifying – and a very real problem.”

“Noise-induced hearing loss and tinnitus usually occur over a period of time, starting with temporary changes that may initially recover,” says BTA president Tony Kay. “This may become permanent if continued exposure to noise without adequate protection persists. If the noise is loud enough, permanent changes can occur after one exposure.”

For Amos Williams, bassist in metal band Tesseract, his tinnitus began as a teenager, while playing drums in bands and percussion in the school orchestra. “The severity of not having hearing protection was never expressed to me,” Amos says. “[The ringing] was almost expected when you’re playing or attending rock and metal shows. It got progressively worse – and now there’s no such thing as silence.”

“No one used to talk about wearing earplugs,” says Lisa Cope, who works for a record label and has hearing damage and tinnitus after years of tour managing. “I can’t hear anything under a certain decibel, and when I get stressed the tinnitus becomes like a chorus of crickets.”

Tinnitus can be debilitating, both physically and psychologically, and it’s usually in quiet moments that it screams the loudest: many sufferers say it’s worst when going to bed. “I can’t sleep without a podcast on,” says Dan Smith, bassist in extreme metal band Calligram. “When I listen to quieter music on headphones, I can hear my tinnitus over the music.”

For those who work in music, there is the additional worry that it could affect their livelihood. Singer-songwriter Rosalie Cunningham experienced mild distortion in her ears in the past, but after contracting Covid, her symptoms worsened. Now, the prospect of returning to live shows is a concern: “I’m terrified that something will happen on stage, and I won’t know what to do,” she says.

“I used to worry that people would think I couldn’t do my job,” says Eleanor Goodman, deputy editor of Metal Hammer magazine. “But when I started talking about it, I found out that tinnitus is very common in the music industry. Being open about it has been so much better.”

Hearing protection is key – even if you already have tinnitus. “People can think, I’ve done the damage, I’ll just carry on,” says Georgina Burns-O’Connell, lead author of the BTA report. “But that can do more damage.”

In 2016, Help Musicians started the Musicians Hearing Health Scheme in partnership with the Musicians’ Union, which gives musicians access to hearing assessments and moulded earplugs at a reduced cost. “Musicians should care as much for their hearing as they do for their instrument,” says James Ainscough, the charity’s chief executive. So far, the scheme has helped over 12,000 people.

There are also services that offer mental health support, such as Music Minds Matter, and the BTA recently established monthly support groups specifically for musicians. “While there isn’t a cure, there are ways to manage tinnitus, and to live well with it,” says Burns-O’Connell.

Those affected say there are techniques that have helped them – including wearing in-ear monitors and moulded earplugs, staying hydrated, avoiding stress, using podcasts and music as distraction, and support groups and therapy. “CBT put me on a positive path,” says Michael Daniels, a trumpet player, conductor and educator who works in a variety of styles from classical and choral to big band and jazz. “Mindfulness has also been very helpful for me: it’s a way of coming to terms with what’s going on.”

Around two years after his tinnitus diagnosis, Myles Kennedy joined Alter Bridge and went on to tour arenas around the world. Through techniques like meditation and the advanced technology of in-ear monitors, his condition no longer holds him back.

“The tinnitus forced me to take care of my hearing,” says Myles. “Twenty years from now, if we have this same discussion, I want to be able to hear everything you’re saying. I had to learn how to shut off that anxiety, to stop obsessing – it took a long time to get to that point. The in-ear monitors mean that I can continue doing what I love, without doing more damage. I’m so grateful – I can’t imagine a life not making music.”

Everything you want to know about EarMolds